If you read my blog, you will understand what has been happening to me is very, very bizarre.
Mossad, the Israeli spy agency, has declared me their no. 1 enemy.
Anyone who knows me – and I mean to really know me – would be shocked to hear this. In fact, nobody who knows me well would believe it.
The reason most people cannot understand why an agency like Mossad can declare an ordinary person like me their top enemy, is because most people do not understand Mossad.
Mossad motto is: By Way of Deception Thou Shalt Do War.
And Mossad follows that motto to the letter. They have deceived everyone. In fact, Mossad would not like it if I said exactly what they are (and I know they will read this article).
Mossad is a criminal organisation. What do you call a country whose spy agency is a criminal organisation?
Unfortunately, Mossad have managed to deceive almost all humanity.
Through Mossad’s criminal activities against me, I have learnt the world is not the way it seems. For instance, I have reported Mossad’s crimes against me to all organisations I could think of, including UN, UN Human Rights Commission etc; All media I could think of, all over the world, yet none dared report about Mossad’s criminal activities against me.
I have approached publishers – including publishers who have published “very daring books” – but they all cowed when they learnt about my story.
I have discovered that, Mossad acts the way it does, because they know they have pocketed all organisations that matter, all over the world, and cowed everyone else.
Personally, I don’t fear Mossad. The problem is that, as anyone can tell by studying my websites, they have made it impossible for me to operate freely online, through search engine collusion, shadow banning etc.

In the beginning, I was very afraid of Mossad. But as time went on, and I studied their deception tactics, I discovered their ultimate secret. Once I discovered their secret tactic, it is not possible for them to deceive me.
All they do now is harass me.
Mossad knows I know about their ultimate secret, though they wouldn’t like me to mention it. But I will state it all the same: Mossad worships Lucifer.
That gives them extraordinary advantage over other people.
Most people, when they hear about Satan worship, they think about drinking blood, worshipping idols etc. This I would call “Satan-worship-pretend”.
Mossad agents worship the real Lucifer.
This gives them tremendous advantage over everyone else.
Many of the Luciferian things I have seen Mossad do, I cannot state here, because some bad people might use the tactics to terrorise innocent people. 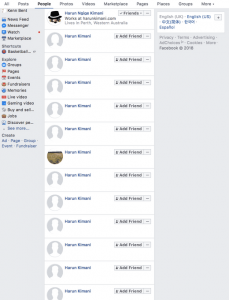 As the image above shows, there are so many Facebook accounts that go by the 2 names of this domain. These also happen to be my names, and that of many other people.
Obviously, many of these FBK accounts are fake, something that is quite unusual for non-public figure names. 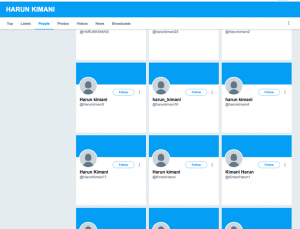 On Twitter, there are also many such accounts, though less than those on Facebook. The problem is that such accounts may be a front to bait innocent people. That is why I registered this domain name, where I link all my accounts.
Just trying to play safe.